Have you switched political party this year? Goldman Sachs has. 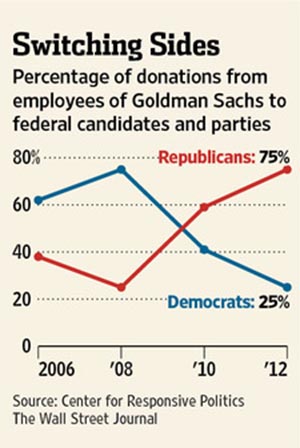 When was the last time that over 50% of your colleagues and friends so massively changed their core values that they entirely switched the political party that they support? For that matter, how many people do you know who have ever switched the parties they support? It is a relatively rare event.

So how is it that there has been an entire inversion of support by Goldman Sachs—a change from supporting Obama in 2008 to Romney in 2012? Such things don’t happen in my circles!

I think that Goldman Sachs sees very little difference between Democrats and Republicans. Generally I see little difference as well, so here Goldman and I agree. But whereas I consider both parties to be similar because they are both statist and war mongering and too desirous of expanding the national government’s power, Goldman Sachs sees the parties simply as being two groups that switch names every thirty years, both of which have been always easily fooled by fraudulent Keynesianism. Goldman Sachs has always had to decide which individual party leaders are more likely to be either bought or conned into supporting the central banking boondoggle that is the Federal Reserve System. The Fed is the gravy train for Goldman Sachs. The Fed provides free money to Goldman Sachs, which Goldman Sachs then loans to the US government for interest. The Fed buys US Treasuries through Goldman Sachs. The Fed, US Treasury Department and Goldman Sachs are three sides of a revolving door that a handful of financial powerbrokers circulate through, with no concern whatsoever for America. These are men without allegiance.

So why has Goldman switched its support away from Obama and toward Romney overwhelmingly? Perhaps it is that Goldman Sachs considers Romney to be less of a threat to the Fed and Wall Street, and indeed that makes sense. Romney is one of those few people who have benefited enormously from the long-time inflationary policies of the Fed. Romney, despite his statements to the contrary, probably won’t support reigning in the Fed, because he will refuse to see the harm that the Fed causes, and will be readily convinced of the goodness of the Fed after only one visit in the oval office by Paul Krugman and his ever-present psychosis.

However, Goldman is also supporting Republicans in general this year. And indeed there may be solid reason that Goldman Sachs might support Romney and the Republicans. Goldman Sachs feasts off the blood sucked by the Fed from the American people. Indeed Goldman has a long history of supporting candidates that will make sure that the Fed will suck the most blood from America and give it to Goldman. They have generally supported Democrats primarily. They supported Obama in 2008. Obama has always supported failed economic policies and he hasn’t changed in that regard. But now perhaps Goldman sees that Obama’s and the Democrats policies are indeed so destructive that a continued Obama presidency will kill America dead, and then there will be no lifeblood left for Goldman Sachs to suck. What is the point of being able to control a president—as easily as Obama is controllable—when the country has died?

Fortunately for Goldman Sachs, they can get behind Romney, who might, possibly, maybe, support some things to help the economy like deregulation and cutting taxes. And still be thoroughly controllable.

Remember, Goldman Sachs only cares about how much blood they can suck. A Romney presidency may help keep America alive, and Romney can then help them keep sucking. And you can count on Goldman Sachs continuing to suck.