Why I wrote ASSUME THE PHYSICIAN 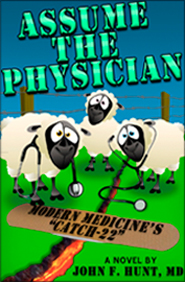 When I was a medical student and
resident, “House of God,” by Samuel Shem was such an important book for so many
of us, demystifying medicine in many ways. Many of the issues presented in House
of God remain entirely relevant today, but there are numerous new concerns that
we all should have about our health care systems–both in the United States and
abroad–that I felt were crying for satirical treatment, at least as much as I was
crying while mourning for the health of Americans.

As Mark Twain said, “Against the assault of laughter, nothing can stand.”

Doctors and nurses and other health care professionals are wonderful, brilliant
and only occasionally psychotic people. But they are caught in a confused
system that most despise and feel powerless to influence. And they are so busy,
so terribly busy, that they don’t have time even to try to solve the
problems. Many, dare I say most, have given up doing anything other than trying
to keep their heads above water.

ASSUME THE PHYSICIAN is written through they eyes of a particularly bright
family practice intern. It is a satirical novel, of course, and this allowed me to
create Dr. Eddie Marcus with the ability to understand–much faster than I ever
did–all the ridiculousness of the systems in which we work. Of course no real
intern is likely to grasp the adverse healthcare impacts of an electronic medical
record, nor the complex and often sneaky intrusions into the doctor-patient
relationship of health insurance and government and regulatory agencies and
medical associations and pharmaceutical companies. I will venture to say that
even experienced practicing physicians and nurses may not recognize some of
the shifty tactics used to manipulate patients and their doctors.

There are so many organizations that like to make rules for everyone to follow
that few people feel empowered over their own lives, their profession or their
health care anymore. The prices of health care are insanely and artificially
inflated for reasons that only take one laughter-induced “Ah-ha!” moment to
understand, although for many this understanding will require a massive change
of perspective.

So I wrote ASSUME THE PHYSICIAN, because, well, it needed to be written.
And I think it needs to be read. ASSUME THE PHYSICIAN is not just for health
care professionals any more than a story about a lawyer, or a ship captain, or a
vampire is just for readers from those professions. It is a love story, a survival
story, a mystery, a horror story, a comedy. I hope you enjoy it and laugh
frequently and loudly, and then let us communicate about the issues raised. But
when we communicate, let’s not blow off steam, but rather let’s let the head of
steam build up to the point where there is enough power to move the engine
right off the current tracks, and onto a path that is totally different.