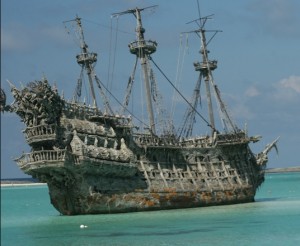 Who is the biggest pirate now?

These are the only federal crimes in the original Constitution.

Counterfeiting: The Federal Reserve counterfeits the US currency at the rate of $85Billion/month right now. Counterfeiting the currency has, since the creation of money, always been a capital offense—punished by the death penalty, because it is so destabilizing to an economy. The Secret Service was established to stop counterfeiting of currency, yet it ignores the largest counterfeiters in the history of the world. Why is that?

In a Republic, the ruler is the law. When the law is defied most by those selected to secure liberty, then there is no longer a Republic, there is but an oligarchy—corporatism, dictatorial, 1984…

Currently in the United States, the most egregious criminals work within the US Government, or through the US government, and laugh at us behind our backs. It is time for us to laugh back. Every one of us needs to laugh when the bankrupt US Government demands we do anything illegal, or when they demand we cooperate with their illegality.

Laugh at the bankrupt fools… If only 10% of us did, truly did, then the moral and financial bankruptcy of the US Government would become rapidly evident to all and what was once America can reemerge. One place to direct our laughter is at the stupidity of our health care system. My novel “Assume the Physician” is designed to help us laugh at the foolishness.

So let’s have fun and laugh…

Against the Assault of Laughter, Nothing Can Stand—Mark Twain.